Hi there guys! We hope that you enjoyed reading our previous blog. Our today’s blog is not about Halloween but it is going to be an interesting one – as we will talk about billboard advertising in general as well as its effectiveness. We will also discuss wall mounted billboards in detail but that’s not it because we have also created a street wall mounted billboard mockup PSD for you guys. You can easily download it for free and can create your very own billboards by editing the PSD file as per your requirements.

So, what exactly is a billboard? To explain it by using easy to understand words, we would say that a billboard is a brand’s huge advertising space which is utilized to promote a message. Billboards are set up in public places for people to look at, get the message within seconds and then take an action – which could be anything for example; availing discounts, attending a food event, checking out a new shoe collection etc.

And what, in your opinion makes billboard advertising an effective mode of communication for the brands? Well, researches are always being done and compiled in order to get data so that appropriate actions can be taken. Below mentioned are some of the insights which we have regarding billboard advertisements:

As per some recent “in-car” surveys and data analysis, it was found out that more than 70 percent of the viewers remember the message / ad they see on a billboard. In addition to that, almost 24 percent viewers take an action on the same day by visiting the store or checking out the website / social media platforms whereas, 31 percent of the people take an action within 1 week of seeing a new billboard.

We are sure that these stats. are enough to convince advertisers to include OOH or billboard advertising in their advertising plans.

There are many different types of billboards and brands & advertising agencies pick and choose them after chalking out the objectives as well as the budget. There are static and mobile billboards for example; roadside billboards, street furniture and cars, buses, motorbikes respectively. And since innovation was brought into static billboards as well so now we can also see digital billboards alongside the roads and traffic signals. Some of the most effective billboards which you can see around the globe are:

In addition to the types of billboards that we have mentioned above, there are more ways to advertise your business & services effectively. Like you can have the transits advertised and you can also have lamp posts designed and put up in popular streets and parking lots. In case you were wondering, these lamp posts become noticeable with the help of street lights. Moreover, your brands can also consider letting front and back lit LEDs do the work for them.

So, that’s that! Now let’s have a look at some easy to follow and super effective tips to design billboards:

And as long as the street wall mounted billboards are concerned, we have done half of the work for you. To get done with your design task, you will have to see what works better for your brand(s) in terms of communication as well as placements. With the help of our mockup PSD, you will be able to demonstrate how your own wall mounted billboards will look like after being mounted. This will be an easier process for your clients to get a clear idea and provide you with the final go-ahead. 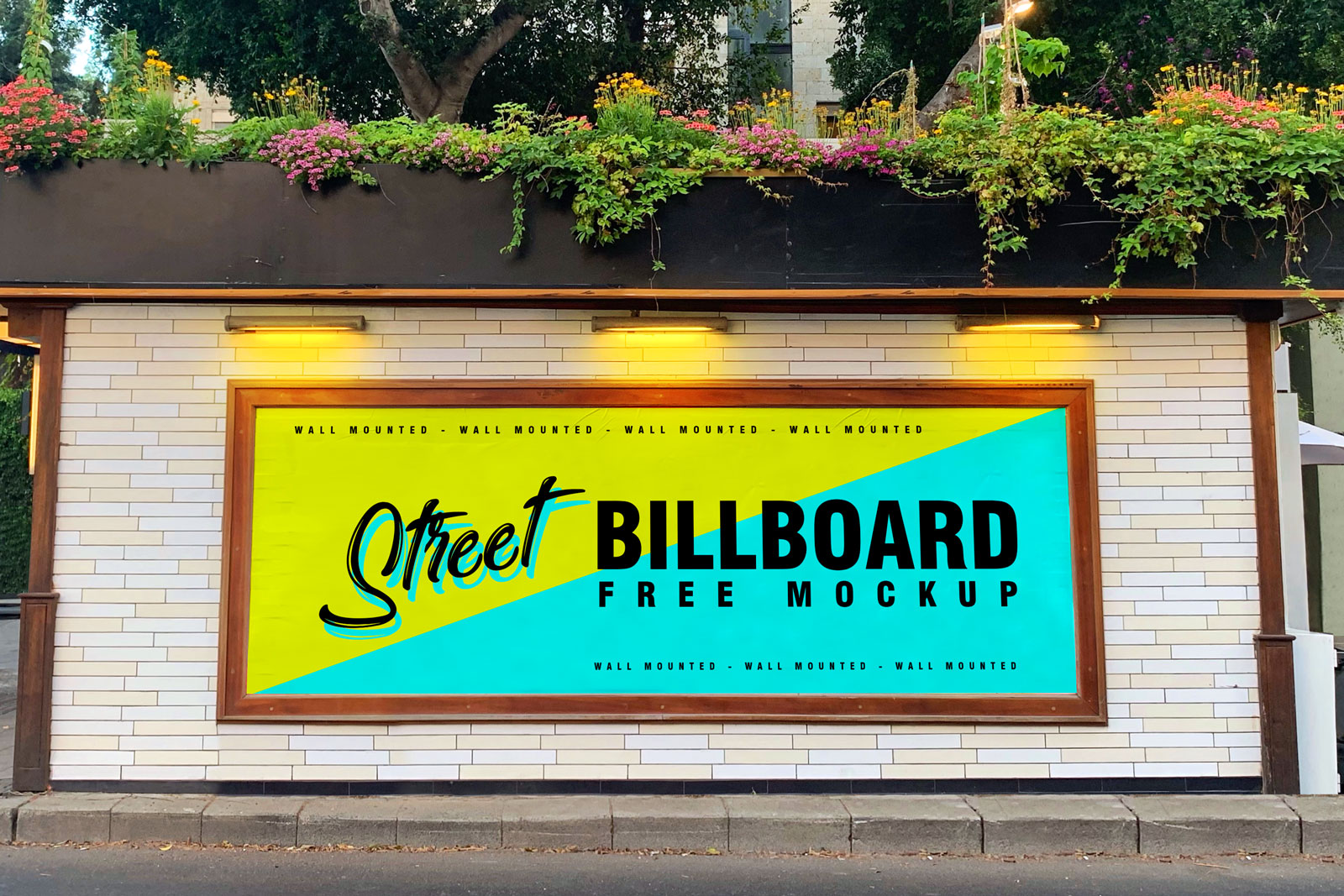 Note:
1. PSD Outdoor Billboard Mockup is allowed for sharing online (A Must Linkback to this page)
2. Say thanks if you like or share/tweet with your friends.

More Free PSD Hoarding Mock-ups you would love to download: